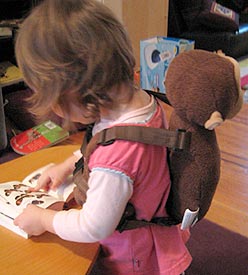 My sweet darlings turned two today (Sept. 25th). I am humbled by my daughters. The entire experience of becoming a parent — a year passing before a pregnancy, two miscarriages, a final successful twin pregnancy — has made me feel more powerful and way more vulnerable than I could have imagined before the idea of being a mama crossed my mind. Today I felt vulnerable and overwhelmed by the insane amount of responsibility I now have. This morning I watched in horror as my little Mimi was nearly hit by a car. It makes me sick to think about it. On her second birthday for chrissake! It was one of those “I turned my head for two seconds” moments, while I loaded Beenie into the car. Really. It was two seconds. But Mimi is very quick, and she started walking into the street, seconds away from an oncomong car. I don’t remember how I got over to her, just that I was yelling her name. STOP! MIMI STOP!!! And I caught her before it happened. On our way home from playgroup. Beenie pulled the same shit two months ago. I almost had a heart attack then, and I almost had a heart attack today. Tomorrow the monkey leashes are coming off the shelf and making a permanent new home in the car. It doesn’t matter that she didn’t stop when I yelled. It is my responsibility to keep her safe and living for many years beyond my own demise. It is my job to keep her in that monkey leash along with her sister until I can be sure they won’t walk out into the street. Even if it means they wear them till they are thirty. Though, I will not be letting them out of the house again until they are thirty, so maybe I can forego the monkey leashes. Maybe I need a monkey leash until I’m safely in the funny farm. Oh wait — I’m already here/there.