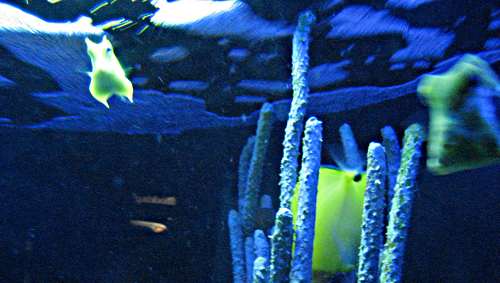 Again, sorry about the delay (sorry, Alix, especially) in writing. Somehow my daughters, at least Beenie, has gotten the idea that she does not need to take naps any longer, which you and I know is total crap, so my precious naptime/alone time has been compromised. I believe this has to do with a number of outings recently that eat into the aforementioned naptime, which means the winding down stage of naptime disappears, which means all but an hour (if I am lucky) of naptime remains. This is not enough. And then bedtime simultaneously is far more labored than it has been in the past. And hubbo thinks that he also deserves some of my attention when he comes home from work. Which leaves me with precious little. Plus, one of my inspirations for posting these silly thoughts on 20Fingers/Toes has been photos I take from my daily outings, and since I lost Photoshop and all my other ill-gotten application programs in the fire (aka the demise of my old hard drive), I had not located a free, downloadable graphics program… that is, until today. I edited and compressed the Sarah and Rachel images below in the new, special graphics program, and think they look good, so I guess I will now be using it. Will tell you what it is when I am sure I can recommend it. Sure beats sending photos to husband’s pc and editing them on there, and sending them back to my laptop. There aren’t enough hours in the day for those sorts of shenanigans.

Hmmmm…. what’s been going on? The girls and I went to the National Aquarium in Baltimore today with a friend and her little boy, Marko, who they are absolutely OBSESSED with… “Marko!” they cry. MARKO! It’s not what he says so much as that smile he flashes when he sees them. There is a genuine love betwixt them all, which is incredible and beautiful with two two year olds and a 14 month old. Just lovely. I got to hang with his very great mama, who is a true artistic, esoteric inspiration. I was telling her about the dream I had this morning, where I was walking down a huge platz in Germany, I almost want to say Reisterstownplatz, but who knows. I was there in the capacity of a full-time, rich artist and the Europeans were really treating me goodly. Visiting with another artist friend who lives in Baltimore, enjoying the lifestyle I so richly deserve of international travel, enough money, strangers who are nice to me because they love my art, or think they should… God it was great. Creative visualization, right? If I can see my future as a wealthy artist/writer, it’s only a few steps away from realizing that vision. Or let’s just say it is. I am not in the mood to burst that particular bubble.

So now I struggle with the fact that Mimi and Beenie only really quieted about 45 mintues ago, even though it is now 4:03 p.m., their official wake-up time. Well, 4 is. My point being, should I let them sleep till 4:30? I think I will, even though it may mean they go to bed later and more cranky. I don’t know what to do. I’m so tired myself I can’t think straight. I look at the basket of laundry on the floor and the filthy kitchen floor and then look back to the computer screen. I want a nap. I will not get a nap.

The aquarium, tho, not to drift swiftly away from my original thoughts, was successful. Even though there were about 500 school children in front of us, hogging every single frackin’ exhibit of fishes, I do think the ladies enjoyed it. I would like to return again someday, when there are no school tours going on, becuase it is a quiet, calm and meditative place. Beenie especially wanted to stand and watch the fish swim by for a few moments. It was a little bit rushed, but it got super late and everyone was hungrees and cranky. At one point all three children were on the ground crawling, just because they could. I believe that is the driving force behind many of their actions. Pull of your pants just cause you can. Smear your food on the kitchen table, dump your milk cup on the floor, just cause you can. That Mimi and Beenie are lucky their mama isn’t the sort of mama who whacks their children. It isn’t that I haven’t considered it, especially recently as both have been super-duper obnoxious. But I am the grown-up, right? I can’t let those little rotters get to me so much that they get slapped. I don’t know what made me even have the thought to slap them. Exhaustion, I guess. Frustration in my own little lack of a creative world which has been semi-squashed. Economic emptiness. There are a variety of factors. I can see how people get pushed to the edge of kindness and patience. But my sweet children aren’t so bad. I don’t remember my parents hitting me but once or twice my entire childhood. It isn’t exactly a good example to drop on your children that you react to stress with hitting, is it? Sigh. I guess that option is out.