How has it been ten days since I’ve been focused enough to write up on this shits? What has happened in the past ten days? Lots, I suppose. At some point I went to a Capricorn party, funny, as it’s usually the Aquarians and Libras who have mass, astrologically driven birthday celebrations. Something great happened at this event. Most importantly for me, it somehow ended what seems like months of a nasty funk in my brain. You could call it depression, I suppose. You could call it enui. Whatever it was, it SUCKED the life out of me and SUCKED and I hope it never comes back (though what I have learned of the artistic temperament over the years means we shall meet again…). Whatever. It is gone now and suddenly life seems hopeful. The timing for this is strange. The earth shakes and quakes and people suffer terribly. Friends of friends die suddenly. The ether is amiss and for no good reason I am feeling inspired. Not because of the badness, perhaps in spite of it?

My neighbor’s family lives in Haiti, and I’ve been worried about her and them, and was relieved to speak with her today. She said her peeps live in the mountains so no big destruction. She also said that you shouldn’t send money to the gov’t there, because they will not share with the people. I’m glad her family is okay.

I would like to recommend a great international aid organization, a place I once worked for pre-babies, that puts your money directly into the communities of people who are in need. Catholic Relief Services. If you are moved to donate to the relief efforts in Haiti, I can say without hesitation, CRS will do good with it. www.crs.org.

This weekend has been simultaneously shitty and inspired. It seems like things are extreme in general at the moment. Lots of creative inspiration and opportunity. And tons of terrible behavior and money/job stresses. But this is hands-down a billion times better than depressed inertia, the inability to move or get excited about anything. Mania? Bring it on. 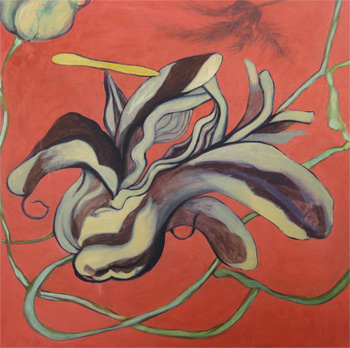 Painted this morning for 1.5 hours, which was violet, sienna, sap green, raw umbered bliss. The big painting is almost done. I was even able to tighten up Nappy’s Puddle Painting and start work again on that, which put me in a great mood. Gotta keep that good art energy window cracked. Shit, I should throw a rock through it. It’s hard to get motivated when you’re not motivated.