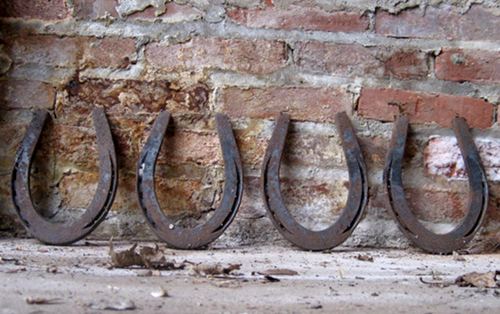 I would like to personally thank Gayle Mahn for letting me know that the way I had the horseshoes resting against the wall at 4horseshoes studio was BAD LUCK. All my good luck was running out the bottoms of the damned horseshoes the way I had them displayed. As per your recommendation, Gayle, I have changed the direction of the horseshoes so they now appear as “U”s, retaining what’s left of the good luck I allowed to run out all over the floor of my freezing cold, damp painting studio. I’m ready for those arts grants to start rolling in soon. The cash could really come in handy in the next few months — it’s ‘spensive to heat our little row house these days! Brrrrrr. 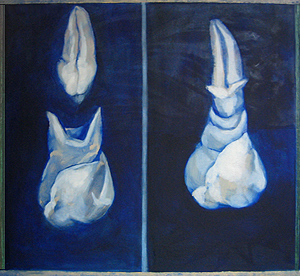 I’m still reeling from selling a Camera Morte/ Neighborhood Apocalypse book a week or so ago. It is the only one so far. That’s okay. I will make $5 on the sale. Maybe I can get me a soy latte at the coffee shop down the street for my troubles. I’m not complaining, mind you. I’m excited it is living, as it were, in a book rather than only on my computer, and more amazed than anything that anyone would want to look at pictures from my dying/possessed digital camera as much as I do. Though I can’t look at them too much. Gives me that uncomfortable, could-be-a-flashback feeling in the pit of my stomach. Thanks for your support, Jeremy! Jeremy is also a patron of my painting. He got his wife, who is a dentist among other interesting things, a blue painting of teeth I did years ago when I had time and energy to paint.

This past week has been difficult for my brain for some reason. Most likely the darkness, the ice sheets formed over the outdoors, being trapped with two free spirits indoors, having little time for my own intellectual and artistic meanderings… I know this sort of thing is small in comparison to real suffering that goes on in this world, in this country, in this city. But I’m here, and this is what is happening in my microcosm. And it is all-encompassing sometimes. I do not regret the path I have chosen/been dealt, I just wish sometimes I had more energy to embrace and focus on the projects and ideas floating around in my head, simultaneously making sure my daughters are getting the very best of me and these early years. Lucky for me, they kind of just take it. Kids do that when you’re pregnant with them, too. They suck out all of the nutrients and whatever else they need from your body and make do just fine. They do that to a certain extent once they are out as well, not necessarily with food, but definitely on emotional levels. Children are resillient creatures. It is important not to take advantage of that by being too self serving. Though you are not doing them any favors by ignoring who you are and need to be. As always, a delicate balance of not screwing everything up.

I would like to keep my sanity for the remainder of this winter. I believe it is possible. Especially now that the horseshoe issue has been resolved.