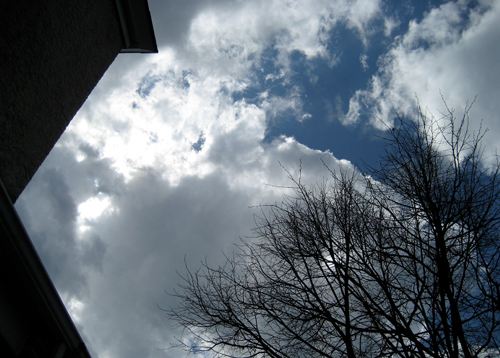 Today we had a pleasant visit from Gillian and her twins, six months to the day younger than Mimi and Beenie. Her kids are Peter and Catherine. The six month difference is noticeable when vocabulary comes into play, but a two year-old and a two and a half year-old still have many similarities. All were agile, moving around, getting into things. My ladies were a tad more used to the word NO, but just a few months back they really took it personally. Peter and Catherine were still in the place where it is an insult to be denied. I would imagine there are many grown-ups that are still in that place. I have met a few in my time. Shit, I don’t really like to be told no, either. Who does? Luckily, none of the sadness lasted very long. And it was interspersed with a number of uncalled for hair-pulling incidents by Mimi, which caused huge tears from Beenie. Why can’t we all get along?

Tired today. Nothing creative happening. Will do yet more laundry in a few minutes and empty dishwasher, search for a job, and wonder why I am so tired. I drank nothing last night and got a full eight hours of sleep, yet yawn and have droopy eyes. I have a few ideas for soundtrack sounds to accompany some of the Camera Morte videos. Am in the market for a cheap but decent USB microphone if anyone out in blogland has any thoughts.

I must admit… I don’t remember when I wrote the above post. But I’m tired tonight and will use it like it is fresh. Oh look, below… it says March 20th. Fresh enough.

Mimi hit some kind of important mark today. She escaped–er–climbed out of her fully locked crib during “naptime” today. This was not immediately known, not by me, or by my parents who were here today, also. Mom and I heard the pattering of little feet for a while, maybe half hour, forty-five minutes, but since I didn’t hear any crying or vocalization of any sort, I figured it was coming from next-door. Then the chatter started up… I ascended the stairs and saw below the crack of their shut bedroom door moving shadows and a puddle of liquid on the floor. The sun streamed behind these things and I heard the sound of someone trying to open the door. This is not usual. This has never happened before. I opened the ladies’ bedroom door to find Mimi standing in a pool of pee-pee, unused diapers and shirts and one pair of tights strewn across the floor. Apparently she had monkeyed her way out of her crib, ripped off her diapers, tried on a bunch of shirts and the tights, realized she had to pee, and was desparately trying to get out of the door to do so, but couldn’t, due to the childproof doorhandle that is on the inside of their door at the moment. That will have to be removed I suppose. This is where the genius lies…

You get used to certain behaviors from your little kids, and they continually challenge the notion that they should be consistent. It is the rock solid base toddlerdom is built on — change is constant, get used to not getting used to anything. I am very proud of my little crazy precious beastie. She has forged ahead toward a diaper free existence and that means for our income, hundreds of extra dollars each month. Way to go Mimi! On a brilliant, perfect opposite move on her part tonight, she screamed at the top of her wild lungs like I haven’t heard since was a colicky baby, for two solid hours. I believe she is teething some evil big molars. Starting tonight. That fact plus the fact that she didn’t take a nap today because she was too busy figuring out her afternoon ensemble makes me not too traumatized by the residual ringing in my ears. The two vodka cranberry seltzer cocktails I have absorbed may have acted as coping enhancements as well.