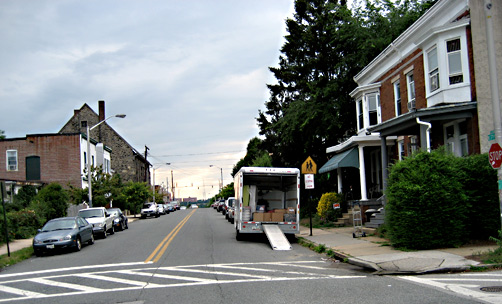 Tonight I was absolved of bad parenting techniques by Alix. She’s the friend I’ve known more than half my life who likes her eggs soft and her (rye) toast and bacon well-done. Alix informed me that Suri, TomKat’s two and a half year old is still on the ba-ba and she’s is doing JUST FINE. As Alix put it, “It’s not like you’re giving them crack…”. She is, of course, right. Thanks, Lixi.

This late afternoon-evening was surreal and wonderful. B and I drove to another old pal from high school’s house in Pikesville, a Baltimore suburb. J and his wife Janet and son Callum have a great pool in their backyard, and invited us and some other peeps over for a little cook-out/swim thing. Friends Peter and Gillian, their one and a half year old twins Peter and Catherine, another old, old friend Ted and his wife Lynn and their 8 month old baby Elana, and us and the girls were all splashing around in the pool soon after we arrived. It was a strange moment. I have known all of these people and most of their spouses for more than ten or twenty years. And I’m not that old (though maybe I am old, if forty is old). A bunch of little kiddies under two years old, and us, the “grown-ups, parents” who used to be teenagers and twenty-somethings and thirty-somethings floating around, laughing. We were in the water WITH OUR CHILDREN. What a strange and glorious and incredibly humbling experience. I don’t take this for granted, not for a second.