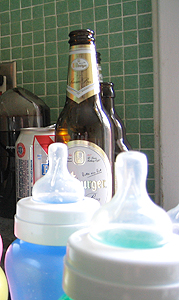 I can’t think of anything more desperate and pathetic than someone who is staying at home with her two kids WITHOUT HER WIRELESS INTERNET FUNCTIONING. There could be worse situations, of course. I could be in Africa or Eastern Europe somewhere, without food or shelter, rogue militants burning my village, killing, raping, dismembering me and my family. That would be worse. But I must speak in relative terms. This is my little world we’re talking about here. A brick bird-row house cage, if you will. Safe, a little boring, and with no wireless. Well — that’s not entirely true — I do have some wireless, and I’d like to thank whichever neighbor is sharing their connection with me, ironically named SECURE. But I can’t get it just anywhere in my house, and I can’t order diapers online using my credit card, because Mister Secure isn’t actually very secure, is he?

I called Verizon (hateful, hateful) yesterday to see if they could help a sister out. This was a futile and extremely stressful hour-long discussion with my two hungry daughters wreaking havoc on the area upstairs while I was connected via ethernet cable, trying to figure out what the F is wrong with my wireless. So annoying is this situation, and so annoying am I writing about it, that I think I’ll just shut up and move on to the next subject. Hopefully my little problem will disappear over the weekend.

As always, there was a poop-fest after I put the girls down for their naps. They laughed, cried, shouted, shook their cribs and threw things until I went up an hour later to see how much poop there was. There was a lot of poop. Diapers changed, another half-hour passed, and I now hear nothing from the ladies room.

My husband and I are mid-way through Season 3 of Battlestar Galactica. It’s such a great escape, something we both need tons of lately. And alcohol just isn’t as easy to indulge in as it used to be. Recently two beers in the evening is almost more than I can stand. Two measly beers! It’s not like I used to be able to drink tons of booze, or even wanted to, but it is a nice way to unwind sometimes. Now, two beers can give me a migrane for days, or not. It’s sort of a crap shoot. Hey, if Mimi and Beenie get to have bottles, then dammit, I should be able to have mine, and without consequence.